Note: I used to post this monthly, but I stopped during the COVID-19 pandemic. I’ve received a number of requests lately to post this again, so here is another update of tracking employment during Presidential terms. We frequently use Presidential terms as time markers – we could use Speaker of the House, Fed Chair, or any other marker.

The first graph shows the change in private sector payroll jobs from when each president took office until the end of their term(s). Presidents Carter, George H.W. Bush and Trump only served one term.

There was a recession towards the end of President G.H.W. Bush (light purple) term, and Mr. Clinton (light blue) served for eight years without a recession. And there was a pandemic related recession in 2020. 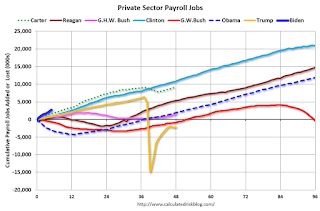 The first graph is for private employment only.

In the first five months of President Biden’s term (Blue), the economy has added 2,750,000 private sector jobs, as the economy recovers from the pandemic. 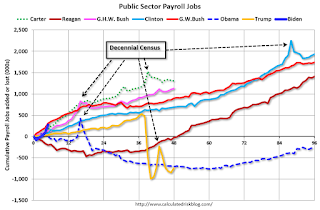