The Cleveland Fed released the median CPI and the trimmed-mean CPI this morning:

According to the Federal Reserve Bank of Cleveland, the median Consumer Price Index rose 0.3% May. The 16% trimmed-mean Consumer Price Index rose 0.4% in May. “The median CPI and 16% trimmed-mean CPI are measures of core inflation calculated by the Federal Reserve Bank of Cleveland based on data released in the Bureau of Labor Statistics’ (BLS) monthly CPI report”.

Note: The Cleveland Fed released the median CPI details for May here. Car and truck rental was up 294% annualized! Used cars and trucks were up 132% annualized. 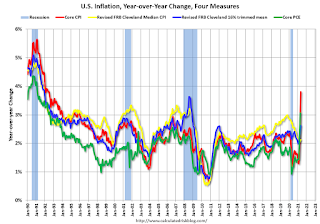 Note: We saw negative Month-to-month (MoM) core CPI and CPI readings in March, April and May 2020. We also saw negative MoM PCE and core PCE reading in March and April 2020. Although inflation picked up in April and May this year, the year-over-year change was impacted by the base effect (decline last year).

Hotels: Occupancy Rate Down 14% Compared to Same Week in 2019