It is possible that supply constraints held back housing starts in April. Here is a comment from MBA SVP and Chief Economist Mike Fratantoni:

“Single-family starts in April dropped more than 13% compared to last month, but permits to build single-family homes saw a smaller decline. This is consistent with reports that builders are delaying starting new construction because of the marked increase in costs for lumber and other inputs. Moreover, builders are also reporting difficulty obtaining other inputs like appliances.”

Total housing starts in April were below expectations, and starts in February and March were revised down slightly. Single family starts decreased in April, but were up 59% year-over-year (starts declined at the beginning of the pandemic).
The volatile multi-family sector is up sharply year-over-year (apartments were under pressure from COVID).
The housing starts report showed total starts were down 9.5% in April compared to March, and total starts were up 67.3% year-over-year compared to April 2020.
Low mortgage rates and limited existing home inventory have given a boost to single family housing starts.

The first graph shows the month to month comparison for total starts between 2020 (blue) and 2021 (red). 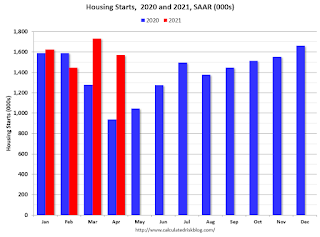 Starts were up 67.3% in April compared to April 2020.  The year-over-year comparison will be easy again in May and June.

2020 was off to a strong start before the pandemic, and with low interest rates and little competing existing home inventory, starts finished 2020 strong.  Starts have started 2021 strong (February was impacted by the harsh weather).

These graphs use a 12 month rolling total for NSA starts and completions. 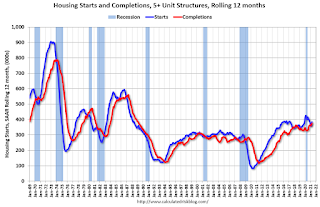 The rolling 12 month total for starts (blue line) increased steadily for several years following the great recession – then mostly moved sideways.  Completions (red line) had lagged behind – then completions caught up with starts- then starts picked up a little again late last year, but have fallen off with the pandemic. 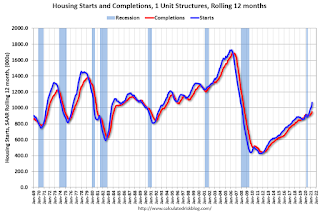