The headline jobs number in the October employment report was above expectations, and employment for the previous two months was revised up significantly. The participation rate was unchanged, and the unemployment rate decreased to 4.6%. Overall this was a strong report.

In October, the year-over-year employment change was 5.8 million jobs. 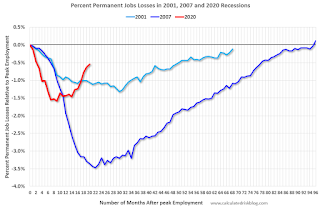 In October, the number of permanent job losers decreased to 2.126 million from 2.251 million in September.

These jobs will likely be the hardest to recover, so it is a positive that the number of permanent job losers is declining fairly rapidly. 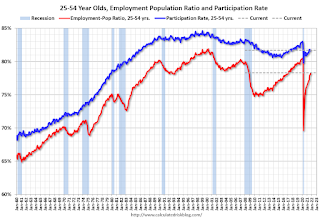 Both are still low and indicate that many prime workers have still not returned to the labor force.

Typically retail companies start hiring for the holiday season in October, and really increase hiring in November. Here is a graph that shows the historical net retail jobs added for October, November and December by year. 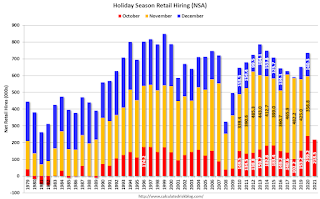 This graph really shows the collapse in retail hiring in 2008. Since then seasonal hiring had increased back close to more normal levels. Note: I expect the long term trend will be down with more and more internet holiday shopping.

This was seasonally adjusted (SA) to a gain of 35 thousand jobs in October. 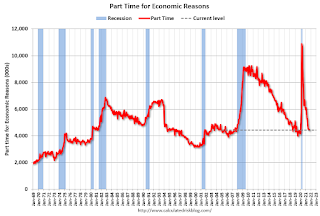 “The number of persons employed part time for economic reasons, at 4.4 million, was little
changed in October. These individuals, who would have preferred full-time employment, were
working part time because their hours had been reduced or they were unable to find full-
time jobs. This measure has essentially returned to its February 2020 level.“

The number of persons working part time for economic reasons was essentially unchanged in October at 4.423 million from 4.468 million in September. This is back to pre-recession levels.

These workers are included in the alternate measure of labor underutilization (U-6) that decreased to 8.3% from 8.5% in the previous month. This is down from the record high in April 22.9% for this measure since 1994. This measure was at 7.0% in February 2020 (pre-pandemic). 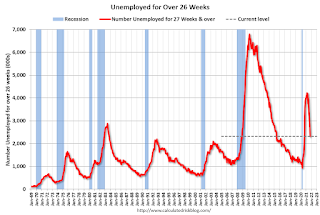 According to the BLS, there are 2.326 million workers who have been unemployed for more than 26 weeks and still want a job, down from 2.683 million the previous month.

This does not include all the people that left the labor force.

The headline monthly jobs number was above expectations, and the previous two months were revised up by 235,000 combined. And the headline unemployment rate decreased to 4.6%. Overall this was a strong report.

However, the prime age participation rate and employment-population ratio, are well below pre-pandemic levels, indicating a large number of prime workers are still out of the labor force. And there are still 4.2 million fewer jobs than prior to the recession.
This report (and the previous reports) show the impact of the pandemic. When COVID cases are rising sharply, the economy slows, and when COVID cases are falling, the economy picks up. There are other factors, but as the FOMC noted this week: “The path of the economy continues to depend on the course of the virus.“