From the Census Bureau reported that overall construction spending decreased:

Spending on private construction was at a seasonally adjusted annual rate of $1,215.2 billion, 0.4 percentabove the revised May estimate of $1,210.3 billion. …

In June, the estimated seasonally adjusted annual rate of public construction spending was $337.0 billion, 1.2 percent below the revised May estimate of $340.9 billion. 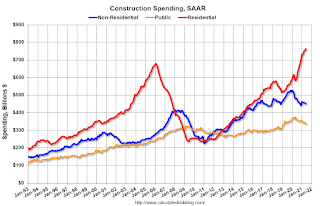 Residential spending is 13% above the bubble peak (in nominal terms – not adjusted for inflation).

Non-residential spending is 9% above the bubble era peak in January 2008 (nominal dollars), but has been weak recently.

Public construction spending is 4% above the previous peak in March 2009, and 29% above the austerity low in February 2014, but weak recently. 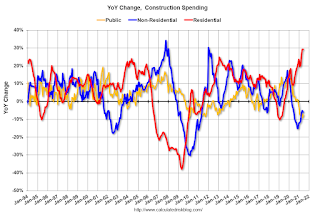 The second graph shows the year-over-year change in construction spending.

Construction was considered an essential service in most areas and did not decline sharply like many other sectors, but some sectors of non-residential have been under pressure. For example, lodging is down 26.5% YoY, multi-retail down 5.2% YoY, and office down 9.1% YoY.

This was below consensus expectations of a 0.4% increase in spending, however construction spending for the previous two months was revised up slightly.