Dogecoin rose by 500% last Friday to make an all-time high at about 45 cents. Is this a flash in the pan, or will Dogecoin go to the moon this week?

Dogecoin in USD terms is, at the time of writing, retesting its all time high just under 45 cents a coin. The current price is already above the key resistance level identified just below 40 cents in this morning’s Dogecoin technical analysis.

The price chart below shows that a pivotal point has arrived: it is likely that the price will either make a bullish breakout beyond Friday’s high, or complete a bearish reversal in this area which will complete the formation of a bearish double top pattern. 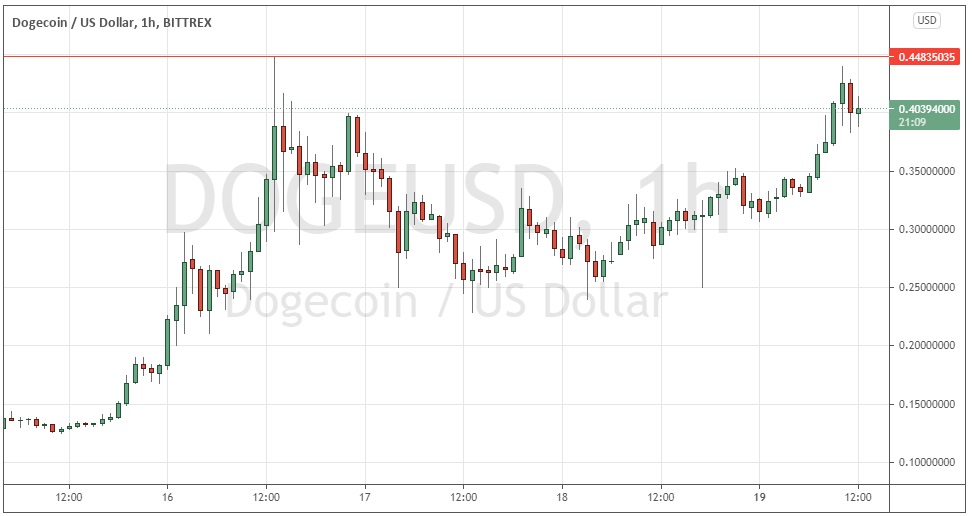 In the bullish scenario, we see either later today or at some time during the coming week the price begin to trade consistently at or above 45 cents, the current all-time high. Such a bullish breakout may well come after a period of bullish consolidation below Friday’s high price, marked by the red line in the price chart above. If there is a period of consolidation before the breakout, that will be likely to make the breakout more attractive and potentially successful, as sellers capitulate rapidly after holding a line for a relatively long time. One thing to watch for in the consolidation scenario is whether the price does not trade very far below the resistance just below 45 cents. If the price bunches narrowly just below 45 cents, then any eventual breakout becomes more likely to be an explosive one.

In the bearish scenario, we see the price fail to sustain any breakout beyond 45 cents for very long, or even fail to reach 45 cents entirely. The price may consolidate below 45 cents for a while, and if volume (which can be measured by the average true range indicator) rises over time, that will suggest that a decisive bearish reversal will be more likely to arrive. The final stage of the bearish reversal scenario would arrive when the price breaks down to trade at a lower low than any bullish inflection point, when implied support starts to break down.

What Does this Mean for Me?

Dogecoin has been the subject of intense speculative interest and increased by 500% in value just a few days ago, which suggests it may make equally dramatic and explosive short-term price movements now. This means that if you are prepared and able to trade Dogecoin while keeping your risk under control, you may have an interesting opportunity to profit now from price movements in Dogecoin.

One especially exciting element here is that Dogecoin’s previous “zone of comfort” was no higher than 15 cents per coin, meaning that a bearish reversal could easily produce a 50% fall. Conversely, a bullish breakout will be into “blue sky” with no obvious upper limit. This means that it may be possible to make a relatively large profit on Dogecoin soon.

Many Forex/CFD brokers do not offer Dogecoin, but you can trade Dogecoin with eToro, a broker renowned for its cryptocurrency offering.