Note: The year-over-year occupancy comparisons are easy, since occupancy declined sharply at the onset of the pandemic.  So STR is comparing to the same week in 2019.

The occupancy rate is down 4.2% compared to the same week in 2019 (skewed by timing of Memorial Day), but the 4-week average is still down significantly compared to normal.

Boosted by the Friday and Saturday of Memorial Day weekend, U.S. weekly hotel occupancy reached its highest level since late-February 2020, according to STR‘s latest data through 29 May.

Percentage changes were skewed more to the positive because the 2019 comparable was the week after Memorial Day. Regardless, this past Saturday’s 83.0% occupancy level was the country’s highest since October 2019. Weekly ADR and RevPAR were boosted to pandemic-era highs as well. STR analysts note that while the positives around leisure demand are obvious headed into the summer, the path to recovery remains a rollercoaster with a lack of business travel, both domestic and international, preventing hotels in many markets from making up more of the ground lost in 2020.
emphasis added 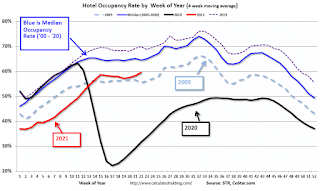 Occupancy is now above the horrible 2009 levels and weekend occupancy (leisure) has leisure has been solid.