Note: The year-over-year occupancy comparisons are easy, since occupancy declined sharply at the onset of the pandemic. So STR is comparing to the same week in 2019.

The occupancy rate is down 7.3% compared to the same week in 2019. Leisure (weekend) occupancy has recovered, but weekday (more business) is still down double digits.

From CoStar: STR: Weekly US Hotel Occupancy Inches Closer to 70%

In addition to occupancy reaching its highest point since the week ending 26 October 2019, ADR and RevPAR were the highest of the pandemic-era. Weekend occupancy surpassed the 2019 comparable for the second time in three weeks, while ADR was 13% higher than the corresponding weekend from June 2019. 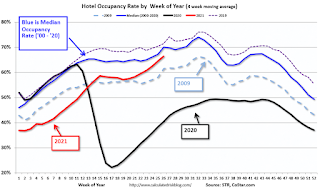 Occupancy is well above the horrible 2009 levels and weekend occupancy (leisure) has been solid.

With solid leisure travel, the next two months should have decent occupancy – but it is uncertain what will happen in the Fall with business travel.

Construction Spending increased 0.2% in May