Total nonfarm payroll employment rose by 559,000 in May, and the unemployment rate declined by 0.3 percentage point to 5.8 percent, the U.S. Bureau of Labor Statistics reported today. Notable job gains occurred in leisure and hospitality, in public and private education, and in health care and social assistance.
…
The change in total nonfarm payroll employment for March was revised up by 15,000, from +770,000 to +785,000, and the change for April was revised up by 12,000, from +266,000 to +278,000. With these revisions, employment in March and April combined is 27,000 higher than previously reported.
emphasis added 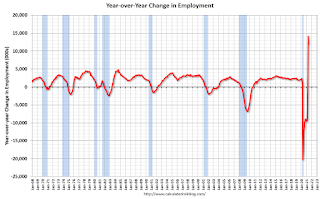 In May, the year-over-year change was 11.900 million jobs.  This was up significantly – since employment collapsed in April 2020.

Payrolls for March and April were revised up 27 thousand, combined. 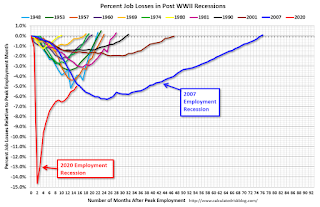 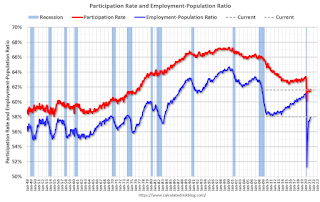 The Labor Force Participation Rate decreased to 61.6% in May, from 61.7% in April. This is the percentage of the working age population in the labor force. 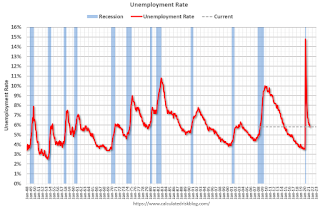 This was below consensus expectations, however March and April were revised up by 27,000 combined.