Mortgage applications decreased 1.8 percent from one week earlier, according to data from the Mortgage Bankers Association’s (MBA) Weekly Mortgage Applications Survey for the week ending July 2, 2021.

“Mortgage application activity fell for the second week in a row, reaching the lowest level since the
beginning of 2020. Even as mortgage rates declined, with the 30-year fixed rate dropping 5 basis points
to 3.15 percent, both purchase and refinance applications decreased,” said Joel Kan, MBA’s Associate
Vice President of Economic and Industry Forecasting. “Treasury yields have been volatile despite mostly
positive economic news, including last week’s June jobs report, which showed ongoing improvements in
the labor market. However, rates continued to move lower – especially late in the week. The 30-year fixed
rate was 11 basis points lower than the same week a year ago, but many borrowers previously refinanced
at even lower rates. Refinance applications have trended lower than 2020 levels for the past four
months.”

Added Kan, “Swift home-price growth across much of the country, driven by insufficient housing supply, is
weighing on the purchase market and is pushing average loan amounts higher.”

…
The average contract interest rate for 30-year fixed-rate mortgages with conforming loan balances
($548,250 or less) decreased to 3.15 percent from 3.20 percent, with points decreasing to 0.38 from 0.39
(including the origination fee) for 80 percent loan-to-value ratio (LTV) loans.
emphasis added 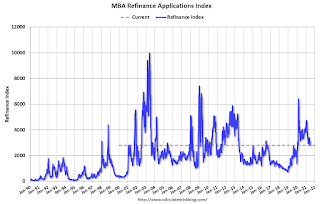 With low rates, the index remains elevated, but has been declining recently. 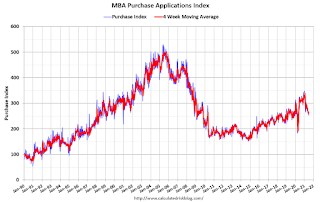 According to the MBA, purchase activity is down 14% year-over-year unadjusted.