Mortgage applications increased 0.3 percent from
one week earlier, according to data from the Mortgage Bankers Association’s (MBA) Weekly Mortgage
Applications Survey for the week ending September 10, 2021. This week’s results include an adjustment
for the Labor Day holiday.

“Purchase applications – after adjusting for the impact of Labor Day – increased over 7 percent last week
to their highest level since April 2021. Compared to the same week last September, which was right in the
middle of a significant upswing in home purchases, applications were down 11 percent – the smallest
year-over-year decline in 14 weeks,” said Joel Kan, MBA’s Associate Vice President of Economic and
Industry Forecasting. “Both conventional and government purchase applications increased, and the
average loan size for a purchase application rose to $396,800. The very competitive purchase market
continues to put upward pressure on sales prices.”

Added Kan, “While the 30-year fixed rate was unchanged at just over 3 percent, it was not enough to
drive more refinance activity. Refinance applications slipped to their slowest pace since early July, and
the refinance share of applications fell to 65 percent, which was also the lowest since July.”

…
The average contract interest rate for 30-year fixed-rate mortgages with conforming loan balances
($548,250 or less) remained unchanged at 3.03 percent, with points decreasing to 0.32 from 0.33
(including the origination fee) for 80 percent loan-to-value ratio (LTV) loans.
emphasis added 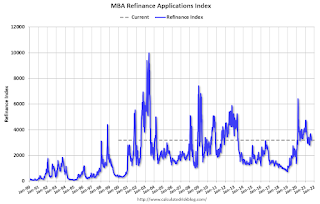 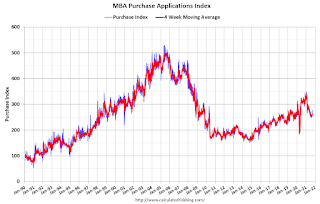 According to the MBA, purchase activity is down 12% year-over-year unadjusted.