Mortgage applications increased 2.1 percent from one week earlier, according to data from the Mortgage Bankers Association’s (MBA) Weekly Mortgage Applications Survey for the week ending May 7, 2021.

“Mortgage rates fell last week to the lowest levels since February, tracking the dip in Treasury yields. The decline in rates helped the refinance index reach its highest level in eight weeks, driven by a 4 percent increase in conventional refinances. Additionally, refinance loan balances increased for the fourth straight week, an indication that higher-balance borrowers acted to take quick advantage of lower rates,” said Joel Kan, MBA’s Associate Vice President of Economic and Industry Forecasting. “The first week of May was also strong for the purchase market. Applications were up 13 percent from a year ago, which was around the time the housing market awakened from the pandemic-induced stall in activity. Most markets this spring continue to see robust demand, but activity continues to be constrained by insufficient inventory levels, as well as homebuilder challenges related to the ongoing shortages and price increases for building materials.”
…
The average contract interest rate for 30-year fixed-rate mortgages with conforming loan balances ($548,250 or less) decreased to 3.11 percent from 3.18 percent, with points decreasing to 0.32 from 0.34 (including the origination fee) for 80 percent loan-to-value ratio (LTV) loans.
emphasis added 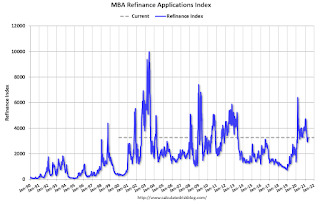 With low rates, the index remains elevated, but below recent levels since mortgage rates have moved up from the record lows. 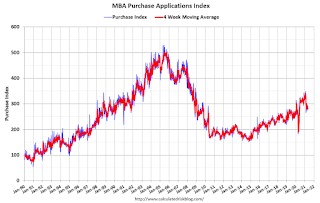 According to the MBA, purchase activity is up 13% year-over-year unadjusted.

Note: The unadjusted MBA purchase index will be up year-over-year for another week or so, since purchase activity collapsed in the early weeks of the pandemic – but then the comparisons will be more difficult.