Mortgage applications increased 4.2 percent from one week earlier, according to data from the Mortgage Bankers Association’s (MBA) Weekly Mortgage Applications Survey for the week ending June 11, 2021. The previous week’s results included an adjustment for the Memorial Day holiday.

“Mortgage applications bounced back after three weeks of declines, increasing over 4 percent last week. Both purchase and refinance applications were up, including a 5.5 percent gain in refinances. The jump in refinances was the result of the 30-year fixed rate falling for the third straight week to 3.11 percent – the lowest since early May. U.S. Treasury yields have slid because of the uncertainty in the financial markets regarding inflation and how the Federal Reserve may act over the next few months,” said Joel Kan, MBA’s Associate Vice President of Economic and Industry Forecasting. “Purchase activity also rebounded, even as supply constraints continue to slow the housing market. An almost 5 percent increase in government purchase applications drove most of last week’s gain while also tempering the recent growth in loan sizes. Purchase applications were still down 17 percent from a year ago, which was when the mortgage market started seeing large post-shutdown increases in activity.”
…
The average contract interest rate for 30-year fixed-rate mortgages with conforming loan balances ($548,250 or less) decreased to 3.11 percent from 3.15 percent, with points increasing to 0.36 from 0.34 (including the origination fee) for 80 percent loan-to-value ratio (LTV) loans.
emphasis added 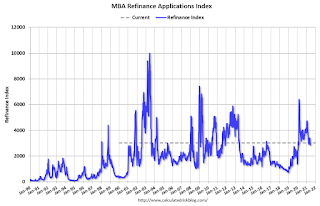 With low rates, the index remains elevated, and picked up this week as rates declined. 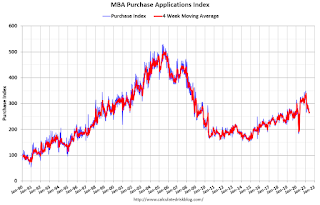 According to the MBA, purchase activity is down 17% year-over-year unadjusted.

Note: The year ago comparisons for the unadjusted purchase index are now more difficult since purchase activity picked up in late May 2020.