Note: This is as of August 1st.

From the MBA: Share of Mortgage Loans in Forbearance Decreases to 3.40%

The Mortgage Bankers Association’s (MBA) latest Forbearance
and Call Volume Survey revealed that the total number of loans now in forbearance decreased by 7
basis points from 3.47% of servicers’ portfolio volume in the prior week to 3.40% as of August 1, 2021.
According to MBA’s estimate, 1.7 million homeowners are in forbearance plans.

“Forbearance exits increased as August began and new forbearance requests declined, resulting in the
largest decrease in the share of loans in forbearance in three weeks,” said Mike Fratantoni, MBA’s
Senior Vice President and Chief Economist. “1.7 million homeowners remain in forbearance, 13% of
whom were current on their payments as of August 1st. Of those who exited forbearance last week,
more than 10.5% were current. Forbearance has surely provided both insurance and assurance for many
of these homeowners who worried about ongoing hardships, and it is positive to see so many continue
to be able to make their payments while in forbearance.”

Added Fratantoni, “Delinquency rates have increased slightly for borrowers who have exited
forbearance and began repayment plans, deferral plans, or modifications over the course of the
pandemic. However, July’s strong job market report provides evidence of a rebounding economy, which
should provide further support for homeowners exiting forbearance in the months ahead.” 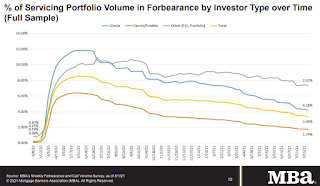 This graph shows the percent of portfolio in forbearance by investor type over time. Most of the increase was in late March and early April 2020, and has trended down since then.

The MBA notes: “Total weekly forbearance requests as a percent of servicing portfolio volume (#) decreased relative to the prior week: from 0.06% to 0.04%.”