From the MBA: Share of Mortgage Loans in Forbearance Remains Unchanged at 3.25%

The Mortgage Bankers Association’s (MBA) latest Forbearance
and Call Volume Survey revealed that the total number of loans now in forbearance remained
unchanged relative to the prior week at 3.25% as of August 22, 2021. According to MBA’s estimate, 1.6
million homeowners are in forbearance plans.

“The share of loans in forbearance changed little once again this week, as both new requests and exits
remained at a slow pace,” said Mike Fratantoni, MBA’s Senior Vice President and Chief Economist. “We
expect a sharp increase in forbearance exits over the next month as many borrowers reach the 18-
month mark and see their forbearance plans end. For those borrowers who have exited in August, the
majority either enter deferral plans or obtain modifications.”
emphasis added 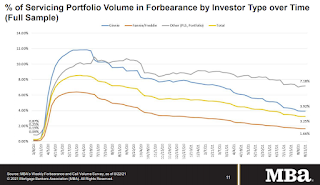 This graph shows the percent of portfolio in forbearance by investor type over time. Most of the increase was in late March and early April 2020, and has trended down since then.

The MBA notes: “Total weekly forbearance requests as a percent of servicing portfolio volume (#) remained unchanged relative to the prior week at 0.05%.”

Housing: Inventory is the Key Metric in 2021