From the NAR: Existing-Home Sales Decline 2.7% in April

Existing-home sales waned in April, marking three straight months of declines, according to the National Association of Realtors®. All but one of the four major U.S. regions witnessed month-over-month drops in home sales, but each registered double-digit year-over-year gains for April.

Total existing-home sales, completed transactions that include single-family homes, townhomes, condominiums and co-ops, slipped 2.7% from March to a seasonally-adjusted annual rate of 5.85 million in April. Sales overall jumped year-over-year, up 33.9% from a year ago (4.37 million in April 2020).
…
Total housing inventory at the end of April amounted to 1.16 million units, up 10.5% from March’s inventory and down 20.5% from one year ago (1.46 million). Unsold inventory sits at a 2.4-month supply at the current sales pace, slightly up from March’s 2.1-month supply and down from the 4.0-month supply recorded in April 2020. These numbers continue to represent near-record lows. NAR first began tracking the single-family home supply in 1982.
emphasis added 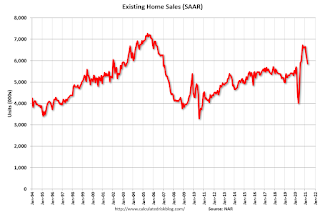 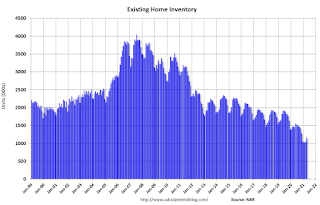 According to the NAR, inventory increased to 1.16 million in April from 1.05 million in March.   Headline inventory is not seasonally adjusted, and inventory usually decreases to the seasonal lows in December and January, and peaks in mid-to-late summer. 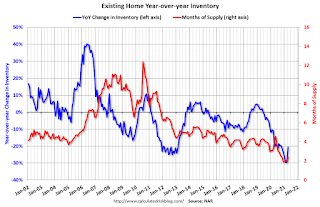 Months of supply increased to 2.4 months in April from 2.1 months in March.

This was below the consensus forecast. I’ll have more later.