The Federal Reserve Bank of New York’s Center for Microeconomic Data today issued its Quarterly Report on Household Debt and Credit. The report shows that total household debt increased by $85 billion (0.6%) to $14.64 trillion in the first quarter of 2021. The total debt balance is now $344 billion higher than the year prior. While mortgage, auto loan, and student loan balances have continued to increase, credit card balances have substantially decreased. The Report is based on data from the New York Fed’s Consumer Credit Panel, a nationally representative random sample of individual- and household-level debt and credit records drawn from anonymized Equifax credit data.

Mortgage balances–the largest component of household debt–rose by $117 billion in the first quarter of 2021 and stood at $10.16 trillion at the end of March. Credit card balances declined by $49 billion in the first quarter, a substantial drop and the second largest quarterly decline in card balances in the history of the data (since 1999). Credit card balances are $157 billion lower than they had been at the end of 2019, consistent with both paydowns among borrowers and constrained consumption opportunities.
…
New extensions of credit were strong in 2021Q1 in both mortgages and auto loans. Mortgage originations, which include mortgage refinances, reached $1.1 trillion, only slightly below the record high seen in 2020Q4. Auto loan originations, which includes both loans and leases, edged down slightly but remain high at $153 billion. Only 15% of the $153 billion of newly originated auto loans were originated to borrowers with credit scores below 620, the lowest share seen in the history of the data..
emphasis added 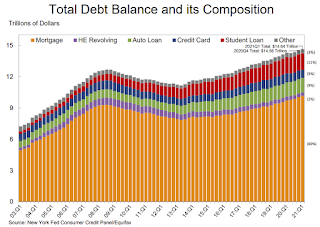 Here are two graphs from the report:

The first graph shows aggregate consumer debt increased in Q1. Household debt previously peaked in 2008, and bottomed in Q3 2013. Unlike following the great recession, there wasn’t a huge decline in debt during the pandemic.

From the NY Fed: 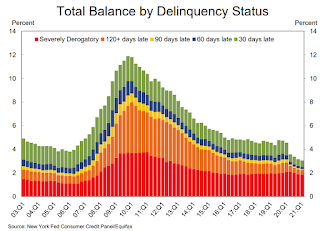 The second graph shows the percent of debt in delinquency.

The overall delinquency rate decreased in Q1. From the NY Fed:

Aggregate delinquency rates have continued to decline since the beginning of the pandemic recession, reflecting an uptake in
forbearances (provided by both the CARES Act and voluntarily offered by lenders), which protect borrowers’ credit records from the
reporting of skipped or deferred payments. As of late March, 3.1% of outstanding debt was in some stage of delinquency, a 0.1
percentage point decrease from the fourth quarter, and 1.5 percentage points lower than the rate observed in the first quarter of 2020,
just as the Covid pandemic hit the United States. Of the $448 billion of debt that is delinquent, $343 billion is seriously delinquent (at
least 90 days late or “severely derogatory”, which includes some debts that have been removed from lenders’ books but upon which
they continue to attempt collection). 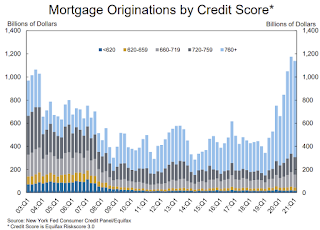 From the NY Fed:

There is much more in the report.