Government transfer payments decreased sharply in April compared to March, but were still almost $1.4 trillion (on SAAR basis) above the February 2020 level (pre-pandemic).  Most of the increase in transfer payments – compared to the levels prior to the crisis – is from unemployment insurance and “other” (includes direct payments).

This table shows the amount of unemployment insurance and “Other” transfer payments since February 2020 (pre-crisis level).  The increase in “Other” was mostly due to parts of the relief acts including direct payments.

There was a large increase in “Other” in March due to the American Rescue Plan Act.
Note: Not in the table below, but Social Security payments haven’t increased significantly since the pre-recession levels (from $1,065 billion SAAR in Jan 2020 to $1,108 billion SAAR in Apr 2021).

A key measure of the health of the economy (Used by NBER in recession dating) is Real Personal Income less Transfer payments. 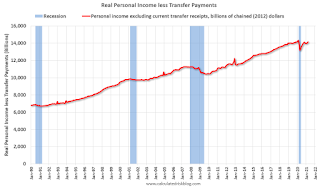 This measure of economic activity increased 0.5% in April, compared to March, and was up 0.3% compared to February 2020 (previous peak). 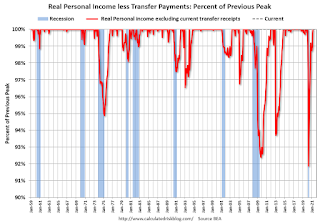 Another way to look at this data is as a percent of the previous peak.

Real personal income less transfer payments was off 8.1% in April 2020. That was a larger decline than the worst of the great recession.