On a monthly basis, retail sales were unchanged from March to April (seasonally adjusted), and sales were up 51.2 percent from April 2020.

From the Census Bureau report:

Advance estimates of U.S. retail and food services sales for April 2021, adjusted for seasonal variation and holiday and trading-day differences, but not for price changes, were $619.9 billion, virtually unchanged from the previous month, and 51.2 percent above April 2020. … The February 2021 to March 2021 percent change was revised from up 9.7 percent to up 10.7 percent.
emphasis added 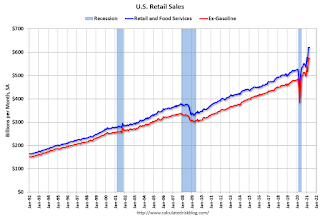 Retail sales ex-gasoline were up 0.1% in April.

The second graph shows the year-over-year change in retail sales and food service (ex-gasoline) since 1993. 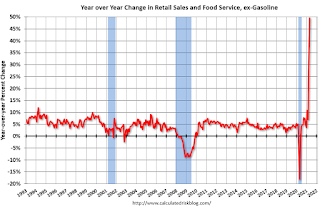 Retail and Food service sales, ex-gasoline, increased by 49.5% on a YoY basis.

Sales in April were slightly below expectations, however sales in March were revised up (February was revised down).