The key reports this week are December CPI and retail sales.

For manufacturing, the December Industrial Production report will be released.

7:00 AM ET: The Mortgage Bankers Association (MBA) will release the results for the mortgage purchase applications index.

8:30 AM: The initial weekly unemployment claims report will be released. The consensus is for 210 thousand initial claims. 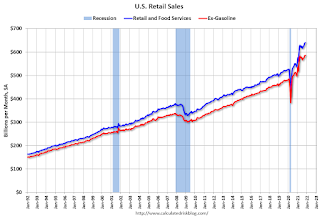 8:30 AM: Retail sales for December is scheduled to be released. The consensus is for a 0.1% decrease in retail sales. 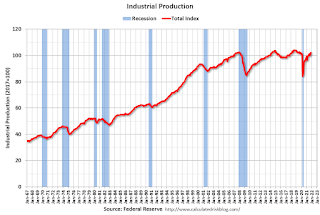 9:15 AM: The Fed will release Industrial Production and Capacity Utilization for December.

This graph shows industrial production since 1967.

The consensus is for a 0.3% increase in Industrial Production, and for Capacity Utilization to increase to 77.0%.

10:00 AM: University of Michigan’s Consumer sentiment index (Preliminary for January).