The key reports this week are April CPI and retail sales.

For manufacturing, the April Industrial Production report will be released on Friday. 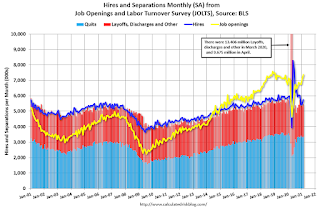 10:00 AM: Job Openings and Labor Turnover Survey for March from the BLS.

Jobs openings increased in February to 7.367 million from 7.099 million in January.  This is close to the series maximum of 7.574 million.

—– Wednesday, May 12th —–
7:00 AM ET: The Mortgage Bankers Association (MBA) will release the results for the mortgage purchase applications index.

—– Thursday, May 13th —–
8:30 AM: The initial weekly unemployment claims report will be released.  The consensus is for a decrease to 480 thousand from 498 thousand last week. 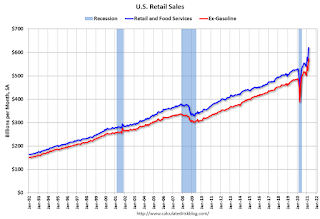 8:30 AM ET: Retail sales for April is scheduled to be released.  The consensus is for 1.0% increase in retail sales.

Retail sales ex-gasoline were up 9.7% in March. 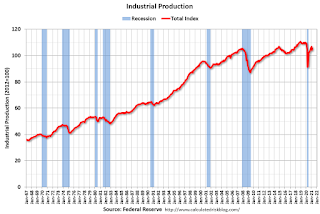 9:15 AM: The Fed will release Industrial Production and Capacity Utilization for April.

This graph shows industrial production since 1967.

The consensus is for a 1.2% increase in Industrial Production, and for Capacity Utilization to increase to 75.2%.

10:00 AM: University of Michigan’s Consumer sentiment index (Preliminary for May).