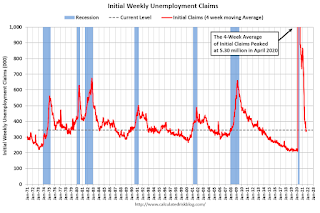 The dashed line on the graph is the current 4-week average. The four-week average of weekly unemployment claims increased to 344,000.

Note (released with a 2 week delay): There were an additional 647,690 receiving Pandemic Unemployment Assistance (PUA) that decreased from 1,059,248 the previous week (there are questions about these numbers). This was a special program for business owners, self-employed, independent contractors or gig workers not receiving other unemployment insurance. And threre were an additional 630,814 receiving Pandemic Emergency Unemployment Compensation (PEUC) down from 991,813.