While signs are emerging that the consistent decline of for-sale inventory is beginning to slow and could be on the verge of reversing, the pressures that have pushed home prices upward at their fastest pace in years remain in place and prices continue to press higher.

…
Following sharp monthly declines in January and February, March saw a more modest retreat in inventory, suggesting that the historically tight inventory pressures may finally be starting to ease. But that anticipated relief has not yet materialized and the competition for the relatively few homes on the market remains red hot. Nationally, nearly half of all homes that go under contract are doing so in less than a week and nearly a third of homes are selling for above their initial list price – more than twice the share from a year ago. What’s more, mortgage rates have held near all-time lows and the gradual re-opening of the economy has encouraged many would-be buyers to enter the mix. All told, there is little, if any, indication that home prices will slow their appreciation anytime soon.

Monthly and annual growth in April as reported by Case-Shiller is expected to accelerate from March and April 2020 in all three main indices. S&P Dow Jones Indices is expected to release data for the April S&P CoreLogic Case-Shiller Indices on Tuesday, June 29.
emphasis added 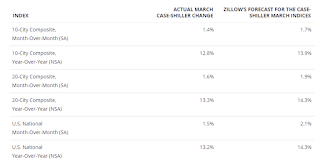 The Zillow forecast is for the year-over-year change for the Case-Shiller National index to be at 14.3% in April, up from 13.2% in March.